Eeyore and the Donkey Sanctuary

Eeyore is a great fan of the Donkey Sanctuary at Sidmouth in Devon. He goes there as often as his humans can take him - sometimes carrying a box of money he has collected and sometimes with a bag of carrots or some biscuits as a treat for his friends. They look forward to seeing him when he comes and often give his noze a nuzzle - or his ears a nibble - as a way of saying thank you for our presents. 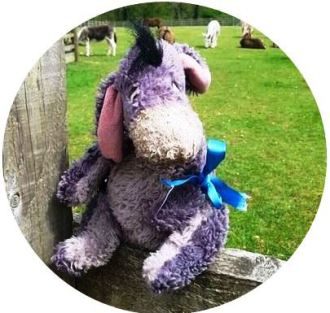 Eeyore usually takes other members of his family with him - Littl'un and Middlun are always with him - so is Donkee who loves to bray loudly to get attention from a wide audience (and start a lound chorus of braying in the barn and the fields!)