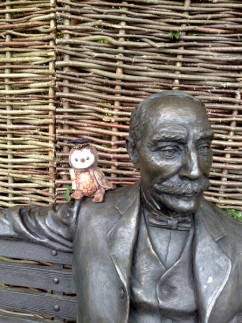 Wol - in conversation with Sir Edward

Wol lives in North Common which is in South Gloucestershire. He has a large family - over 100 at the last count - and he also keeps two humans called Mark and Richard to help him with travel and everyday tasks like getting up in the mornings and going to bed at night.

His main hobby is his music. he listens to Classic FM all day and votes in the Hall of Fame. In the evening he might watch a bit of television if his humans insist but he really prefers the radio. He deso enjoy going to concerts and he has concert halls in London, Birmingham, Cardiff and Bristol. Wol has heard lots of symphonies and choral pieces. His number one piece is the Cello Concerto by Elgar. He has been to Elgar's birthplace and wants his humans to take him again.

Wol has a special friend - he is Tedz. Sometimes he is a bit naughty but most of the time he sits quietly with Wol and listens to the music.

The rest of the family

We have a large family and we are an adventurous lot. The Bears make up the biggest group. They have a weekly convention which lasts from Friday to Monday. Then there are the birds - three penguins, two ducks and a goose. The have a feathered friends meeting every weekend and sometimes combine with the bears to listen to the radio.

Our Beavers are very important - Best Beaver chooses the wine we have in the evenings, Captain Beaver takes charge of Private Beaver and Big Beaver just lives for his next scandal. Big Beaver has some other hobbies including being hugged (called tenshun) and being whacked (called fun). He also occasionally wears a kilt. (have you seen him dancing in his kilt - with his sporran showing?).

There is also the Australian contingent - Kanga, Roo, Sheraton and Featherdale. Kanga is the navigator and plans all our trips. Sheraton looks out for helicopters (jelly-coppers) and Roo sings, takes charge of finding poeraking spaces and tells us all about Mr Wopsley's Horse.

Eeyore's hobby is raising funds for the Donkey Sanctuary - and visiting there as often as he can. He is helped by Littlun and Middlun - and sometimes by Donkey and Donks. Dopy and Grumpy are too busy quarrelling with each other to get really involved! 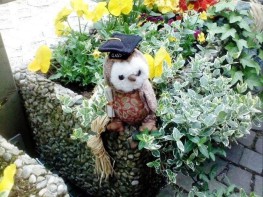 Wol's birthday is on August 17th  (he share a birthday with Mark who is one of his humans). One of his best birthday treats was a trip to Westendorf in Austria - the picture shows him in the flowers. Seal also shares a birthday with Wol and Mark.

The other human is Richard who has a birthday on November 13th. He shares his birthday with Best Beaver, Captain Beaver, Eeyore, Raccoon and Donks. The others all have birthdays too - many of them at Christmas.