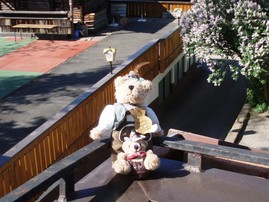 Heinz and Hanz feel at home in Westendorf

Years ago we used to go to Austria for holidays. One time we had booked for an evening meal and concert. That was fine but no-one said where we were to go and we spent hours wandering around Salzburg looking for it. We were just in time.

Then another time we went to Westendorf and everything went a bit wonky - our humans chose dates when everything was closed. All the ski lifts were closed; all the restaurants were closed; most of the shops were closed. And our hotel was closed! But the kind lady who owned it took pity and left us have rooms. It was better than when they have customers so we didn't mind too much. Anyway, we had a good time.

But the real disaster has only just been put right. Our human forgot about the photographs and has only just found them on his camera. Pictures of us on holiday and no-one able to see them. These humans. What are they like?

So a very late welcome to pictures from Westendorf 2006 - when one of our humans had his fortieth birthday!!!