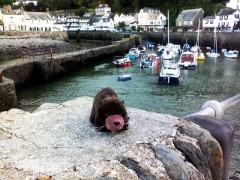 Best Beaver - he was the first.

Best Beaver started it all. He was the first of the Beaver Family. He arrived one day in a box - it had been a long dark boat-trip from Canada. When he first arrived he found a place on the television and would sit and stare at his humans. They couldn't understand this at first but then realised that he just wanted to get to know them. When they realised this they named him Best of Beavers. Later on Kanga and Roo arrived. Then Wol. They all became friends and, together, have taken charge of our ever growing family.

After Best came Captain - the second of the Beaver family to arrive.  He was sitting by the conservatory door guarding Eeyore's balloon when the wind took him and he floated about for ages. This was his great adventure.

We met Big Beaver at Toronto Airport. He is number three in the Beaver family. He was on a shelf showing off his large rear end and his two chosen humans pooled their last few Canadian dollars and brought him home to England.

Last of the Beaver family to arrive was Private Beaver who is a sort of Miniature Captain. He spends time with Sheraton and they get up to all sorts of pranks - usually teasing Uncle Big Beaver.