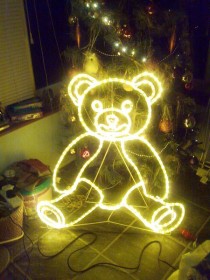 Light Tedz used to sit on the lawn at the front of our home. But a few Christmases back some idiot humans cut his cable late at night and walked off with him. He was so frightened at what they might do to him but, luckily, they didn't hurt him too much and left him at the far end of the road where his humans found him the next morning. Now he shines at the back of the house.

This picture shows him in our conservatory just after he was rescued. His humans rejoined him to his cable and now keep him very safe.