Moose - and his Christmas Antler Muffs 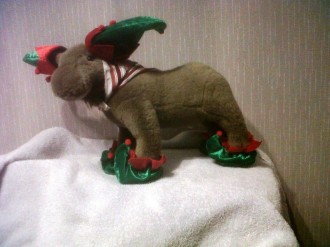 Moose has been with us a long time. But he spent seven years forgotten on the bedroom floor covered with piles of laundry. At least, that's his story! But now he is one of the family. He has two beds. One he shares with Dancing Duck. The other he shares with Squeak the Otter. He swaps round every week.

Moose is a dedicated follower of fashion. He wears a scarf all year round and is very keen on wearing seasonal antler muffs. This year one of his humans bought him some Christmas antler muffs with matching slippers. So now he wants to be known as Chris Moose. 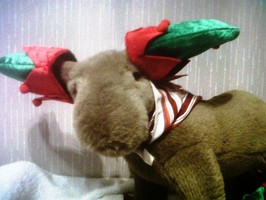 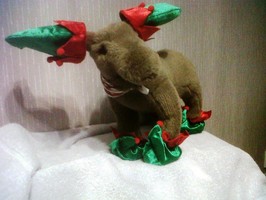 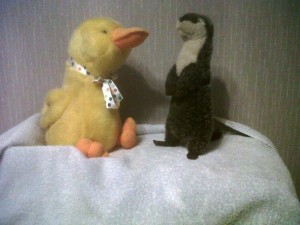 Everyone in the family likes Moose. But he has two special friends. Sometimes he stays with Dancing Duck. Dancing Duck is slightly bigger than Moose and can sing the Birdie Song whilst doing a sort of soft-shoe shuffle across the floor. At other times he shares a bed with Squeaks the Otter. As you might guess, Squeaks the Otter can squeak. He was meant to be a dog toy but his Aunty Anne rescued him and sent him to be part of our family. We think he is very happy not to be chewed!