Find out here about some of our travels and events in past years. 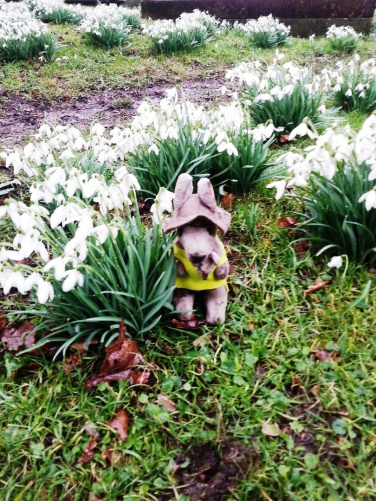 Near to where Kanga and Roo live is a tiny village called Abson. Roo has friends there - he calls them his "Abson Friends" and thinks they should be toasted. Recently there has been a Snowdrop Weekend at the parish church in Abson. And of course Roo and Kanga had to be there. And, of course, they had to have their picture taken. What a pair! But their humans did enjoy tea and cake in the church.

A few weeks later Kanga and Roo visited the Daffodil Weekend - there was a posh tea for the humans and, of course, flowers for Kanga and Roo. 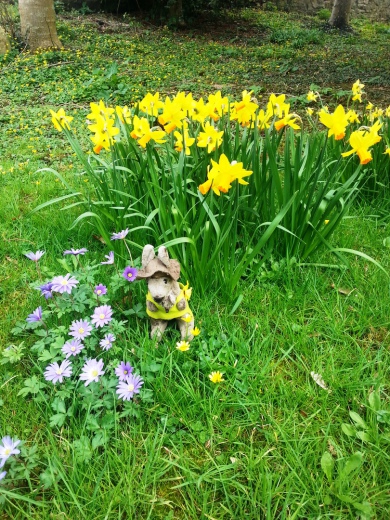 Kanga and Roo in the Abson daffodils

Wol has decided to educate Tedz. A visit to the British Museum would do him good. So off they went. A train trip to London. A night in a good hotel. And theatre in the evening. Wol enjoyed himself and educated Tedz at the same time. Not sure that Tedz was too happy!

Wol and Tedz, Kanga and Roo have been to London. They travelled by train with Mark (one of their humans) and stayed at a posh hotel that cost him lots of money! We think they also got to ride first class on their train.

Tedz was a bit uncertain about it all - he was taken to se Traitors Gate at the Tower of London. This seemed a bit hard - all that he did was to say that the music on Classic FM was a bit boring. But Wol had a wonderful time - he saw Tower Bridge (and nearly fell in the Thames) and visited a church called St Botolph Without. Big Beaver wants to know what St Botolph is without and why someone doesn't give it to him!

Kanga got himself into a pickle with a Gherkin. Why he wanted a picture of it we don't know. This wart on the landscape of London is as ugly to look at as the pickled version is disgusting to eat! But no accounting for taste.

All five travellers hope you enjoy their photographs . . . 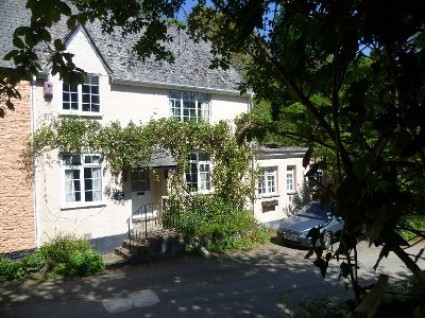 We have all been on holiday to Dartmouth. But most especially this was Winnie's holiday. We stayed in this marvellous place called Alice Cottage which is where Christopher Robin used to live. So Winnie took charge of the whole week - we went on trains and boats, visited an abbey, an otter sanctuary and a rare breeds farm and park where Wol met some owls.  Do book a holiday there - you will have a wonderful time. The cottage is every bit as good as Winnie hoped - and the garden was even better than he hoped with lovely bushes he could sit in and a gorgeous carpet of bluebells. Just take a moment to view the cottage here.

Winnie came on almost every trip. We bought a Jubilee Pass from the Dartmouth Steam Railway and River Boat Company. So we enjoyed steam-train trips, cruises on the River Dart and a coastal cruise. Then, one day, we went to Buckfast where we visited the Abbey, the Butterfly Farm and Otter Sanctuary (where we gained two new members of our family) and then travelled on the South Devon Railway to the Totnes Rare Breeds Farm where Wol met some interesting friends.

All in all we had a wonderful week - and Winnie will be talking about it at the Tedz Convention for many weeks to come. And the weather was pretty kind to us which is more than could be said for that dismal disaster on Bodmin Moor last year! Do enjoy our photographs. 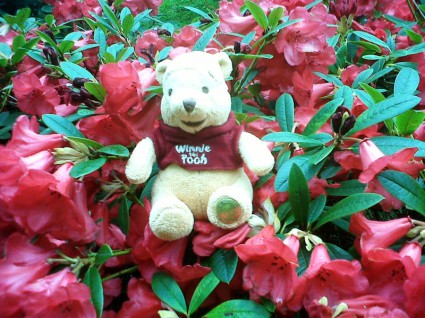 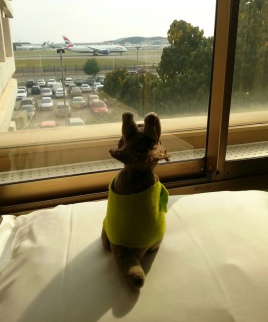 Kanga and Roo has joined up with Captain Beaver and Best Beaver to take their human, Mark, to Canada. They set off from home and have travelled by a very slow and late train to Heathrow where Kanga is going to spend the rest of the day navigating aeroplanes. Here he is watching the runway and preparing to be the world's most important traffic controller. Roo is singing something about magnificient Kangs in their flying machines!

The holiday gang will stay with Aunty Anne in Peterborough with occasional trips to big places like Toronto. The rest of the family and their human, Richard, have been left at home to look after Nutmeg the rabbit and do the housework. They will have fun too.

Kanga is keeping a diary. He is sending the "left behind gang" daily e mails and picture. Please excuse his spelling - remember he speaks Kangalese which is about as far from English as any other Australian language!

Here is his diary; The pictures are below:

(Editor's note: We do not know what "proggys" are but will let you know when we find out.).

De uman loiked de ballay. We finks it sownds borrin but ee did take us to de zoo when ee got back. We seez sumthing called a Sloff. Looked lyke a pile of rags. Didnt moov even wenn Roo sang. Eez goin to lunch wiv Laura an her  sister today. Rather him than us wee finks. Cpt an Best say hello. K

We enjoid Wkd last night. It wuz guud cus Roo didnt no de songs. We wuz sposed too be goin on a bote tryp today but it az bin cansalled so weez all sad. De yuman sed ee mite take us on de ferry instedd. K

(Editor's note: We think this should read Grand Bend and Kanga is probably round it!!!)

(Editors note: Must be a vintage vehicle museum - do have a look at the pictures.)

Day 11 (setting of for England)

(From Heathrow) The Kanga has landed.

So another holiday is over. Watch out below for more photographs. No more from Kanga's diary for a while - he is busy planning his next holiday.

Kanga and Roo are Mopperdops. Well, Roo is and Kanga just hops along to keep an eye on things. This is because Roo is fascinated by Mr Wopsley's horse and the many adventures it has. As a special treat, we took them to Mr Wopsley's New Room to see where he stayed when he was in our area. They even got to sit on Mr Wopsley's bed - the notice telling us not to only applies to humans! The highlight for Roo, though, was sitting on Mr Wopsley's foot so that he could ride the horse. Remember, Roo is very little and the horse is very big. So you may need a magnifying glass to see him. 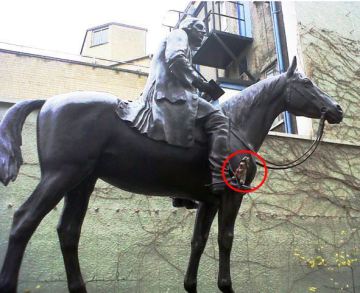 Big Beaver and the Catkins 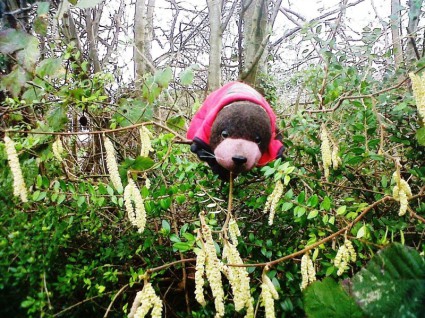 Big Beaver is very bored with winter. It is cold and it is wet. Big Beaver doesn't do cold. And Big Beaver doesn't do wet. So he went hunting for signs of warmer weather. And just a short distance from Kanga's station at Bitton he found the first green shoots of Spring. Well, not quite green but a sort of yellowish colour. They are Catkins. We know that Big Beaver likes sitting in trees and bushes. So that is what he did - he sat among the catkins and thought of warmth and hugs! 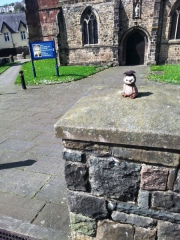 Wol outside Bangor Cathedral - he was very cross to find it closed!

We have been on holiday to Snowdonia. Wol had hoped to attend Choral Evensong at Bangor Cathedral but and arrived at the appointed time to find the Cathedral closed on a Sunday! He is now "Disgusted of Bangor" and, despite Roo singing all that afternoon, Wol did not "have a luvverly time the day he went to Bangor". For more pictures have a look at our Wales Holiday page and see some Welsh trains.

Caritas and Winne give a talk at church 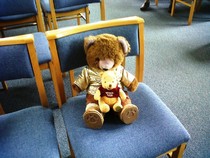 Caritas and Winnie have been to church this week. Caritas is a regular - he helps his human by giving a talk to children at morning services throughout the Bristol Circuit of the Methodist Church and has a note to preach from the Reverend Edward Bear. It was the first time ever for Winnie.

This week they visited Potters Wood Methodist Church where they told everyone about their wonderful holiday in Devon at Christopher Robin's cottage. Caritas did most of the talk but Winnie also had a lot to say about the bluebell wood where he sat in the sunshine and about the adventures of all his friends on the steam train, the river trips and the sea cruise. I'm afraid the people laughed about Wol falling out of his tree and about Big Beaver barfing on the boat. They also talked about how we got a bit lost - and Caritas reminded everyone of the story about a sheep who got lost and how the shepherd found him again.

There is a wonderful and colourful prayer banner at Potters Wood and Caritas and Winnie sat in front of it when they had finished their talk. 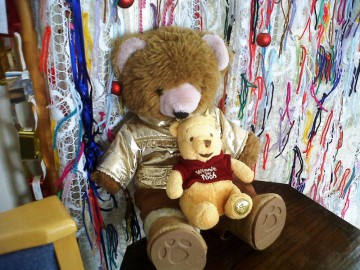 Caritas and Winnie after they had given their talk. They look relieved that it went well - and seem much less nervous now.

Wol has been very unwell. His waistcoat has frayed and developed a small tear. Also his beans are sinking to his lower half and damaging his handsome figure. Surgery became necessary.

We took Wol to Abergavenny to meet Mike from Wellfield Bears. Following a full examination Wol was taken into hospital for treatment. He has been away from home for a few weeks.

All of his family (and his humans) were most distressed and miss him dreadfully. But we bought a treat for him when he gets home – he has a new Christmas CD by John Rutter and another by The Canadian Tenors.

We have been told that Wol's operation begin today and there is hope that he can come home next week. Tedz is very lonely without Wol and has written a poem for the occasion:

We're sorry, Wol,
that you're away;

we miss you more
and more each day.

We heard you've gone
to have an op

and hope it will
not be a flop.

so, hurry, Wol,
and come back home.

This afternoon we met Wol and brought him home from hospital. Tedz is already looking happier and Wol has had a big welcome from all of his family. We will post a new photograph of him soon. Our thanks to Wellfield Bears for looking after him.

Here is a new poem from Tedz:

Taking a trip to
Abergavenny

hoping that Wol
will be fine;

if you see Wol in
Abergavenny

he's a good
friend and he's mine.

people were kind
to him there;

Wellfield Bears
are in Abergavenny -

they treated him
well 'coz they care.

you'll be here
with us tonight.

Seeing you, Wol,
home from Abergavenny

will be a most
wonderful sight.

Luvz. Tedz.  (PS: Dear Marty Wilde - if you read this please don't be cross that I borrowed a bit of your song. It is for Wol and he is my friend. From Tedz)

Here is Wol (with an anxious Tedz looking on) enjoying a mollycoddled convalescence. He sends a big "thank you" of his own to Mike and Janice at Wellfield Bears. 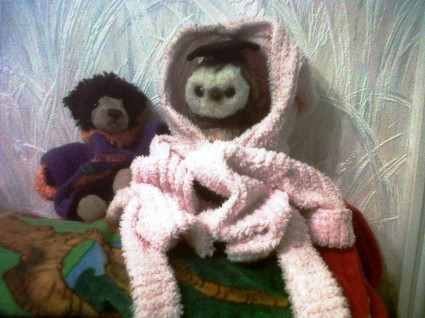