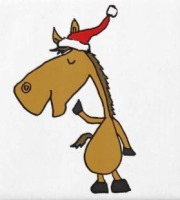 Mr Wopsley’s Horse is in trouble again. Big trouble. And all because he was trying to be helpful. He heard that the Mopperdops of Mopperdop Hall were joining with the Bobbernockerz of Bobbernock Tower to have a Grand Christmas Fayre.

So, he thought, the least he could do is help out at the Grand Christmas Fayre. And he really looked forward to it. Mr Wopsley’s Horse is very thoughtful really. He was full of thoughts about what he could do. Eventually he decided that he would go dressed as Father Christmas in a bright red suit with a white beard and lots of pretty tinsel on his tail.

The very next day after thinking this thought he was up early and waiting for the bus with his bus pass between his teeth. As usual it was late because the Nice Drivver had overslept again. But Mr Wopsley’s Horse didn’t mind. He liked the Nice Drivver and thought of him as his best friend. Sadly the Nice Drivver didn’t quite see it like that. He thought Mr Wopsley’s Horse was a menace to all passengers. And, to be fair, Maisie and Moppet, Nibbly-Nip and Tiddly-Tea all agreed with him because they had been on the bus when things went wrong on other journeys. This day they were all on the bus with Tiddly-Tea who had a tummy full of gin leading the rest in some very out-of-tune carol singing.

On climbed the Horse. The singing stopped with looks of dismay all round. Mr Wopsley’s Horse thought they had stopped so that he could tell them where he was going – to the Father Christmas Shop at Kayshum to buy a suit. Oh dear! What a shock for the Horse when they told him there was no such shop. And there was already a Real Father Christmas going to the Fayre. He sat on the floor and wept piteously. Wet tears flowed all over the bus splashing everyone’s clothes until Nibbly-Nip told the Horse that he could be money collector in chief which was a very important job. Mr Wopsley’s Horse stopped crying immediately and led the carol singing with Tiddly-Tea all the way to Kayshum.

At long last the Big Day came. It was the Grand Christmas Fayre of Odle-Kum-Land. And the Horse was there with an enormous nose bag hung round his neck and a saddle-bag round his middle. The idea was that stall-holders would put their takings in the bags. Coins in the saddle-bag and notes in the nose-bag. And it worked very well. The Grand Christmas Fayre made lots of money and Mr Wopsley’s Horse was carrying it round in his bags and guarding it from all the kool-skids who were trying to nick it.

But disaster was bound to come. And it was Maisie and Moppet who started it off. They saw how hard the Horse was working as he went round to each stall collecting the money. They were in charge of the Mince Pie and Christmas Pudding stall and decided that Mr Wopsley’s Horse was a reformed character who deserved encouragement and a bit of a treat. So the very next time he came round to collect their takings they offered him a Mince Pie from their best silver tray. Maisie had to stretch on tiptoe so that the Horse could take his Pie from the tray. Unfortunately, at that very moment, Nibbly-Nip offered Moppet a pinch of snuff which made her sneeze. Maisie was so shocked she tripped and the entire trayful of Mince Pies fell into the nose-bag.

Mr Wopsley’s Horse dived his head into the nose-bag to retrieve the Mince Pies. He intended to eat one and give the rest back but, sad to say, they were all crushed together and sticking to the five pound and ten pound notes. The panic all round him alarmed the Horse and just swallowed everything in the bag – Mince Pies, banknotes and all. Sixty Mince Pies that took Maisie and Moppet a week to bake all gone in one bite. But even worse – over a thousand pound of banknotes gone as well.

What a to-do. Mopperdops were blaming the Bobbernockerz for allowing the Horse to help. Bobbernockerz were blaming the Mopperdops because the Horse was their tenant and Mr Wopsley was their leader. Everyone was quarrelling and Mr Wopsley’s Horse was so distressed he crept out and trotted up to the Dofflin for a drink. When everyone in the bar realised that his saddle-bag was full of cash they befriended him and he shared the money round to buy drinks.

What a to-do. But it was the Nice Drivver who had the best idea. When he heard what had happened he remembered that the horse had a tendency to go. And that the bags of horse manure, would be very valuable. So the Mopperdops and Bobbernockerz had a big meeting and decided that someone would have to sit behind Mr Wopsley’s Horse and wait for the money to come out. Unfortunately, there were no volunteers to do the job. So Nibbly-Nip was nominated and voted on as it had been his idea to let the Horse have the money.

And that’s how it is. Mr Wopsley’s Horse is standing at the bar of the Dofflin with a pint at his front end and Nibbly-Nip with a big bucket at his rear. So far, the horse has gone once with two five pound notes and his bus pass in the bucket. Nibbly-Nip has a long wait with his bottle of whisky and a packet of crisps by his side. And by the way – Mr Wopsley’s Horse is wearing a red suit and a white beard. A merry Christmas everybody!